In My Humble Opinion

IMHO Jim Chappell is one of the founding father’s and early pioneers of the piano music genre that I play. He released his first record in 1985 and has many other albums to his credit.

I first heard Jim’s music in the early 90’s when I was a sophomore in college and one of the reasons I switched to the piano from guitar (I also studied jazz guitar in college.)

I never had the pleasure of hearing him play live until last night. Thanks for letting me sit in on a song Jim. And thanks for the after hang. I enjoyed talking about all things music with you and your hosts at dinner last night.

Have fun on the rest of your tour. 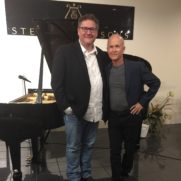